A mark of a sustainable city is that the waste it produces is disposed of efficiently, and as much of it as possible can be recycled. Automated waste disposal is just the first step along that route. The aim is to utilise the city as a source of raw materials.

There are no refuse trucks clogging the streets of Gujarat International Finance Tec City – GIFT City for short – in India. Not because it doesn’t produce any waste. Quite the contrary: once completed, the city’s 25,000 homes, 100,000 people and over 500,000 jobs will be creating some 400 tonnes of rubbish every day. But instead of rubbish in bins placed out on the streets, the 25- to 60-storey buildings (of which there are more than 100 in the city) have been provided with waste disposal chutes. The waste tipped into them will not simply drop into a bin beneath. Instead, a vacuum system from Swedish company Envac will “suck” it at around 90 kilometres per hour into one of seven collecting stations. Public waste bins are also connected to the system. A level sensor detects when the bin is full. A valve beneath it then opens and the waste is automatically emptied into the vacuum system and conveyed to the collecting station. Once there, the organic waste is filtered out and the remaining recyclable waste is separated. The residual waste is converted by plasma gasification into a synthesis gas, which is in turn used to generate electricity for the Smart City. All that is left over is slag, and that can be used as a material in road-building, for example. The first development phase of the system has been operational since April 2015. The overall project is scheduled for completion by 2028. Ramakant Jha, Managing Director and Group CEO at GIFT City, comments: “GIFT City is India’s first Smart City, which is being developed as a global financial hub. Being a Smart City, most of the infrastructure we are developing will add value to the overall development and the automated waste collection system at city level will remove human interaction in the collection and disposal of waste.”

It is relatively easy to implement an underground vacuum tube system for waste disposal in a newly built city. In a long-standing urban environment, however, it would be a very expensive and complex undertaking. But such cities no longer have to miss out on smarter waste disposal: the municipalities of Eindhoven, Geldrop-Mierlo and Valkenswaard in the Netherlands, for example, have fitted out their 1,200 refuse containers with sensors from a company named BWaste. They signal to the control centre via a GPRS transmitter (with no SIM lock) when the container is almost full. A routing software program translates the information received into a route plan which guides the refuse trucks only to the containers that actually need emptying. Overfilled containers, with all the associated problems, are a thing of the past, and waste management contractor Cure Afvalbeheer is able to reduce the number of truck runs. Menno Beukema, Managing Director of BWaste, comments: “No other waste management corporation in the Netherlands – and maybe even in Europe – is using sensors to gauge the levels of all its refuse containers. Cure is a real pioneer in the field.”

The city as a raw material source

But efficient collection is only the first step in a smart waste management chain. Recycling is key. After all, as the world’s population continues to grow and becomes ever more prosperous, raw material resources are in increasingly short supply and so they have to be utilised more efficiently. “Urban mining” is the term used in this context, with cities being “mined” for their raw materials. This is feasible because the machines and other things we use on a daily basis – in our houses, in our vehicles – contain large quantities of raw materials. In a city like Vienna, for example, there are about 4,500 kilograms of iron, 340 kilograms of aluminium, 200 kilograms of copper, 40 kilograms of zinc and 210 kilograms of lead for every inhabitant. A modern-day 100 square-metre apartment contains some 7,500 kilograms of metals – roughly equivalent to about seven cars. If this man-made raw material store can be tapped into, it will not only help to conserve natural resources, but also reduce dependency on imports. That does, however, demand the development of new technologies to recover raw materials present in only small quantities, which are currently not economically viable to recycle. And in future, products should be designed right from the start to be recyclable by “urban miners”, enabling raw materials to be recovered more easily. That is also true in relation to new buildings such as those under development in GIFT City: They are conceived as “green buildings”, designed from the start in such a way that, at the end of their useful lives, as little material as possible lands on landfill sites, and can instead be easily re-used as building material. 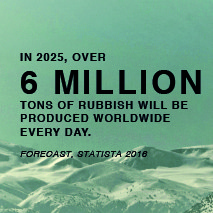