Robots are going to be interacting ever more closely with humans in ­future. For that to ­happen, it is essential that ­robots are able to perceive people, react to their actions, and do not endanger them in any way.

One of the key trends in robotics is direct collaboration between humans and machines. Whereas just a few years ago robots were mainly to be found in industrial applications, they are nowadays also helping people in areas such as disaster relief, in the home, and in surgical operations. In doing so, they are increasingly moving out of their former protected, encapsulated work spaces and interacting directly with humans. That demands very high standards of safety and functional reliability. There are already numerous standards ensuring that industrial robots do not pose a danger to humans or to their environment even in the event of a malfunction. EN ISO 10218, for example, sets out the requirements for collaborative robots, and can also be applied outside the industrial sphere.
All of this is based on the huge recent advances in electronics and software development. Because in order to avoid harming humans, such service robots have to possess special abilities. Equipped with complex sensor capability, they are able to reliably sense the world around them and their human partners. In future, cognitive skills will additionally enable them to predict and interpret human actions in order to derive their own helpful, safe responses.

Interactive robots monitor their environment, and their allotted working areas, by means of multiple different sensor systems such as cameras and ultrasonic and pressure-sensitive sensors. Using such multi-sensor systems, robots are able to sense their environments with precision and detect any motion within the space. Merging data from different sensors means dynamic obstacles can be tracked and their position and speed estimated. As a result, robots are able to compute how an obstacle – such as a person – will move, and whether a collision might ensue. As the robot moves, its distance from the obstacle is continuously monitored. If the robot detects an unexpected obstacle, it slows its movement or adjusts its planned path so as to avoid a collision.

Genuine interaction demands efficient communication between humans and machines. Thanks to great technical advances, new possibilities are available today which extend well beyond keypad input or swiping. Robots that work with humans need a voice – and in particular intelligent understanding of the spoken word – in order to be truly useful assistants in everyday life. Reliable voice recognition in as many languages as possible, complex semantic processing, incorporating context (whether that be time and place, or information from apps and databases), and natural sounding speech are key requirements. According to the Consumer Technology Association (CTA), the accuracy of word recognition has today reached 95 per cent, thanks in part to developments such as IBM’s Watson, Google Home, Apple’s Siri and Amazon’s Alexa. Back in 1990, recognition rates were virtually zero, and even by 2013 had only reached around 75 per cent. Based on such developments, it is likely that in 2017 computers will for the first time understand the spoken word as well as humans do.
People take in about 80 per cent of all information ­visually, so it makes sense to communicate with robots visually too. New 3D sensor technologies allied to fast data processing and interpretation methods are enabling machines to sense and understand gestures and commands. For example, in future a person will merely have to point to an object and a robot will bring it.

Some quite new impulses are being delivered by a very new but highly promising field of research: soft robotics. It uses biologically inspired technologies to create soft, organic structures, copying movements observed in nature. Robots built according to this principle will no longer be made of rigid materials, executing unstoppable movements and so posing a major hazard to humans. The research involves a wide range of different scientific disciplines, with the fields of electronics, materials, software development, sensor technology and drive engineering all being interlinked. The aim is to create intuitive, safe, sensitive interaction between humans and robots.

Researchers at Harvard University have developed a small, 3D-printed soft robot which requires no electronics. The Octobot – named in keeping with its octopus-like shape – needs no batteries, but instead draws its power from a fuel. It is driven by a chemical reaction which is controlled by microfluids. Such entirely soft robots have no hard edges or solid bodies that might pose a hazard to people. Soft robots are also opening up entirely new potential applications, as their softness allowed them to squeeze through narrow gaps where conventional robots would falter. This is providing particularly exciting potential for robots assisting in disaster relief, for example. 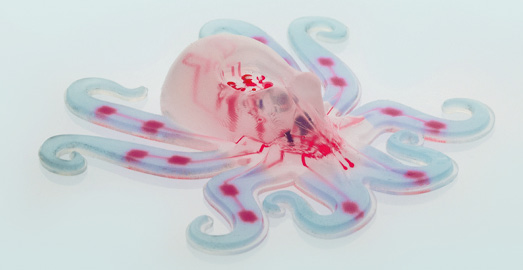